Posted on September 12, 2021 by Marino Communications 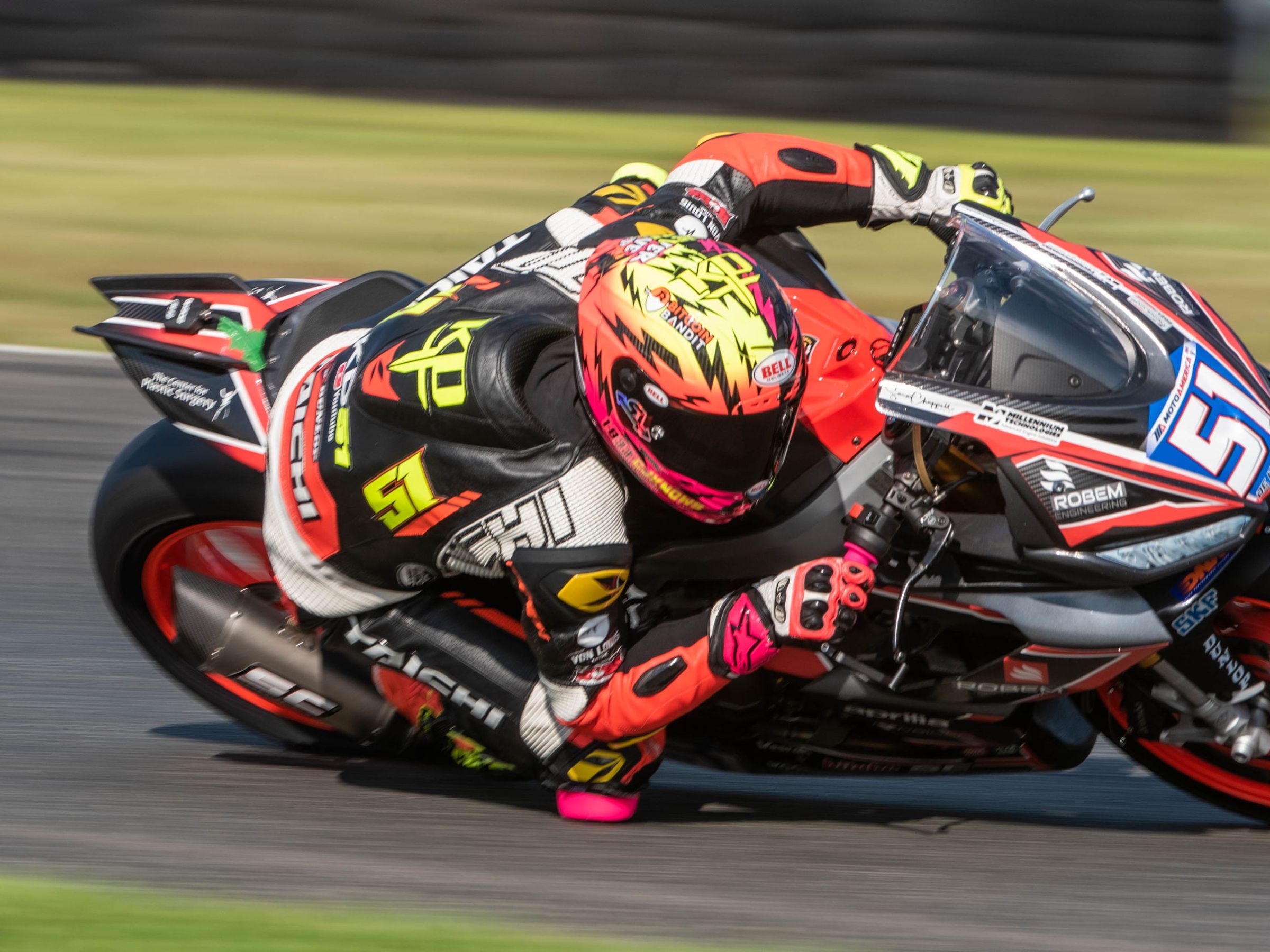 MILLVILLE, N.J. — Kaleb De Keyrel was on the verge of clinching his first MotoAmerica No. 1 plate at the start of this weekend’s MotoAmerica Superbikes at New Jersey, and the Aprilia rider wasted no time wrapping up the 2021 MotoAmerica Twins Cup title on Saturday at New Jersey Motorsports Park. The Minnesotan piloted his Aprilia RS 660 to a podium finish that also secured Aprilia’s first MotoAmerica crown in its maiden year competing in the Twins Cup.

De Keyrel started the weekend with a 53-point lead over second place in the Twins Cup standings and needed to finish Saturday’s race with at least a 50-point advantage to secure the championship. Marcon and De Keyrel took part in a test day at NJMP of Sept. 3, which helped the team develop good setups for its Aprilias — something that has been a struggle with campaigning a newly-homologated-for-2021 motorcycle this year.

All three of the team’s riders were near the top of the time sheets in Friday Twins Cup practice. Marcon led the team’s efforts when he posted the second-fastest time of the session. Toth finished the session third fastest and De Keyrel was fifth fastest. Later Friday, all three riders finished in the top five in the weekend’s first qualifying session. Marcon was again the second fastest rider, and his best lap time was within 0.2 seconds of the session leader and two seconds faster than his best practice time. De Keyrel finished the session in third, and Toth was fifth.

The first of two Twins Cup races slated for the event got underway late Saturday afternoon with Marcon getting the holeshot and De Keyrel holding onto third place into Turn 1. De Keyrel fell as far back as fifth place on Laps 2-4 with his chief championship rival ahead of him in the running order. Marcon was battling for the lead on Laps 4 and 5 with another rider, but lost grip with the rear tire and unfortunately crashed as he exited Turn 1 on Lap 6. With Marcon dropping out of the race, De Keyrel moved up to third place and into a position to win the title after his championship rival dropped to ninth place on Lap 5.

Another front runner dropped out of the race on Lap 6, leaving De Keyrel and Toth in a three-way battle for the race lead. Though the championship was on the line, De Keyrel and Toth put on a great show of close racing – swapping positions twice– and brought their RS 660s home in second and third place, respectively. De Keyrel’s runner-up finish was enough for him to clinch the 2021 Twins Cup title, having secured an unassailable 62-point advantage in the standings.

All three Robem Engineering riders will be back in action Sunday for the second and final Twins Cup race of the weekend. The race is scheduled to start at 4:10 p.m. and is to be broadcast on Facebook Live.

“My Robem Engineering Aprilia RS 660 felt really good from the start of the weekend. We made very minor changes from the setup we were running at the test day, but I knew I had some things to work on to find a little more time. It was a crazy race today, especially with the title on the line. I was on the fence about whether I should push hard to get the win or play it safe. There was a lot of craziness going on, but I’m a racer and I really wanted to go for the win. And we almost had it. I’ll do my debrief with the team tonight and will see if we can come out swinging tomorrow. Winning this championship feels amazing. I’ve been working hard at the go-kart track and my girlfriend, Marissa, has been working extremely hard behind the scenes with my training. It’s just incredible to finally get the No. 1 plate this season. It’s really tough to put together a good, full season of racing, regardless of what class you’re in. A national championship is a life-long ambition of mine, and it’s
humbling to have won it.”

“I’m starting to get used to American race tracks, and yesterday we had a couple issues with the bike during qualifying and couldn’t finish the session. This morning in Qualifying 2, we made pole position, which was very good. In the race, I had a good rhythm going and my plan was to get away from the field. However, I crashed on Lap 6 after touching the paint with a little too much lean angle. I was pushing very hard, but the guys behind me were catching up to me with the slip stream. Tomorrow is another race, and we will focus on continuing to improve tomorrow.”

“Yesterday, we had a lot of work to do after missing the test day. We had to make sure we had the bike dialed in from the first session, and I think we did a good job with that — and it showed in our race result. This is a big step for us from my first round at Pittsburgh, where we had trouble getting a clean lap in practice and qualifying. I was pretty confident in the bike from the first session all the way through the race.”