ALTON, Va. – When MotoAmerica visited VIRginia International Raceway in 2017, Gavin Anthony’s weekend ended with a nasty crash and a trip to the emergency room. At the opening round of the 2018 MotoAmerica Junior Cup season, Anthony’s Graves-prepped Yamaha YZF-R3 arrived late to the track and suffered three catastrophic mechanical or electrical failures. On Saturday, Anthony’s day ended with a trip to the podium. The Attack Performance Herrin Compound rider showed he was unfazed by both the most distant and more recent past and came out on top of a race-long on-track battle to capture an impressive second-place finish. 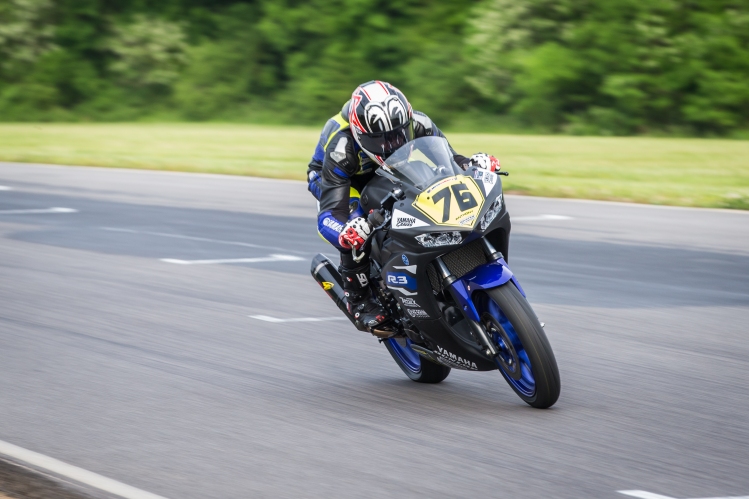 Anthony got a good start from seventh on the grid and was able to make up four positions within the first lap. Anthony briefly led the race on lap 3, and wisely conserved his tires for an end-of-the-race push. For second half of the race, Anthony was locked in a tight four-way battle for the last two podium positions. Anthony’s tire-saving strategy paid off, and he was able to ride his R3 to secure second-place even though he led a chasing pack of competitors onto VIR’s long front straightaway.

The podium finish was Anthony’s fourth such result in MotoAmerica competition, and his first under the new Junior Cup format. Anthony will be back out on-track Sunday, May 6, for the Junior Cup’s second race of the weekend. With rain in the forecast, the team is looking to capitalize on Anthony’s strong wet-weather pace to take home its first win of the season.

Gavin Anthony, #76
“I got a decent start today and was able to quickly move up to fourth position on the first lap. I knew it was going to be a tough battle right to the end of the race, so I decided to hang back and save my energy and tires for the end of the race. For the final two laps, I put my head down and was able to drive the bike hard into and out of corners. On the last lap, I was pushing really hard but was able to hold off the pack that was behind me to finish in second. It felt great getting such a strong result with the tough weekend we endured at Road Atlanta. Tomorrow’s forecast is calling for rain, which I love racing in. Hopefully the wet or mixed conditions will help us get the Attack Performance Herrin Compound Yamaha YZF-R3 one step higher on the podium.”

Josh Herrin, Team Manager/Rider Coach
“I think Gavin did very well today. It looked like he got a little nervous early in the race when a couple other riders tried to pass him, which allowed the race leader to pull away a little bit. His bike also looked a little down on power compared to the other R3s, which is something we as a team will be looking into. Gavin did a great job holding the pack off on the last lap. I was proud of how he came out and performed today considering how Road Atlanta went. Hopefully tomorrow will go even better. With his podium today, Gavin is a little bit ahead of where I thought he’d be at this point in the season. He’s been doing a lot of training at the Herrin Compound, which has helped him develop his race craft and his ability to battle with other riders on track.”