Posted on April 18, 2018 by Marino Communications

The weekend got off to a crazy start for the entire Attack Performance Herrin Compound Racing team before the on-track action began. The team’s transporter suffered a major mechanical problem of its own and was stuck in Louisiana with Anthony’s Graves Yamaha prepped YZF-R3 on board. Wanting to make sure Anthony would be able to race the weekend, the team rented a pick-up truck and had the rig driver drive all night Thursday to deliver Anthony’s R3 in time for Friday’s first practice session.

Despite seeing his R3 for the first time Friday morning, Anthony posted the sixth-fastest time in the session. Things began to go wrong in Friday afternoon qualifying when Anthony’s bike stopped on-track with its first mechanical failure after five laps. The team received a new engine from Graves and had Anthony’s R3 ready to go for Saturday morning qualifying. Anthony was able to gain some valuable seat time on the R3 and qualified inside the top 10 heading into Saturday afternoon’s race. In the race, Anthony had moved up to fifth-place on lap 1 before his engine let go on lap 3. The team made another engine change Saturday night before heavy rains began pelting Road Atlanta early Sunday morning. Sunday’s wet race saw Anthony again move up the field. Anthony was locked in a battle for fourth-place and was battling to be the leading Yamaha R3 before retiring with electrical problems. 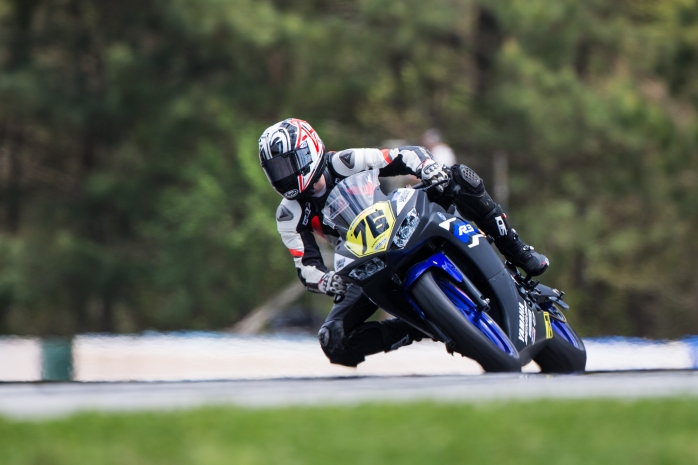 Despite the difficult weekend, Anthony and the entire Attack Performance Herrin Compound Racing team will be looking for more reliability and strong on-track results in the Liqui Moly Junior Cup’s next round at VIRginia International Raceway May 4-6.

Gavin Anthony, rider for Attack Performance Herrin Compound Racing, said, “The weekend started off pretty well. We were the second-fastest Yamaha YZF-R3 in the first practice. We went into qualifying with confidence, but had an mechanical failure in the first qualifying session. We came back on Saturday and were able to qualify 10th. We had great pace in race 1, but had another mechanical failure early in the race. After our second engine change of the weekend, we went into Sunday feeling confident. I like racing in the rain, and we were hoping that the slower conditions would keep us from having any more engine problems. We were battling to be the fastest Yamaha in the field until the bike started experiencing electrical problems and our race ended early again. I really want to thank my crew for their effort this weekend. They kept working hard despite the problems we were having and made the weekend the best that it could be. I will be looking to be fast right out of the
gate again at VIR. I think that track will better suit the Graves/Yamaha R3 package, and I will be looking to earn my first win of the season there.”